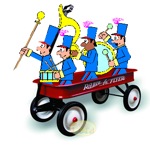 Thursday night I had the privilege to go to the Minnesota Gophers Basketball Game.  I have (not so) closely followed them since I left campus in 2004.  We all know how well they have been playing this year so I decided to check them out.
They played Illinois who they had failed to beat in any of their previous twenty attempts.  My expectations were low as I am used to being let down by certain Minnesota sports (ahem- Vikings/Gopher Football, etc.) but they handled the Illini from the first tip.
To make a long story short I made the rather simple decision, along with many other fans I’m sure, to jump on the Men’s Basketball bandwagon.
I am fully aware that this may draw some criticism from a certain scribe who attended U of I but that doesn’t concern me in the least.
Thank You for taking the time to read my useless post and I’ll see you on the bandwagon.
Perk
p.s. Go Gophs!!!